At the corner of effortless elegance and laidback luxury lies the loveliest of wedding inspiration.
By:
Sara Hubbard 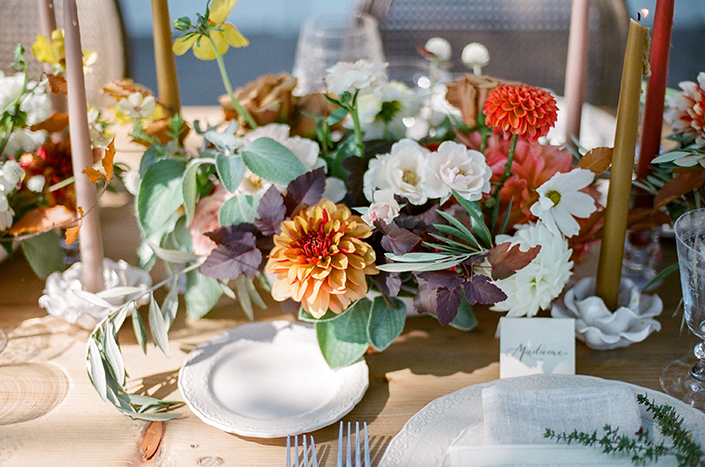 A slice of France exists in Minnesota.

Inspired by their many trips to France, Tara Bailie of A Day in Provence and Anna Grinets of Anna Grinets Photography used the Edward Anne Estate at Bavaria Downs in Chaska as the backdrop to a styled shoot that is any Francophile’s dream. The estate recalled their visits to Marie Antoinette's hamlet at the Château de Versailles – a dreamy country-style retreat that makes the worries of the city fade away.

“The venue is reminiscent of cottage living with its thatched-like roof, rough-hewn wooden beams and the peaceful surroundings. It is a wonderful location for an elegant wedding,” says Tara.

Anna captured it all on film, imbuing the shoot with the softly romantic atmosphere and touch of artistry that are characteristic of the photographer's work. 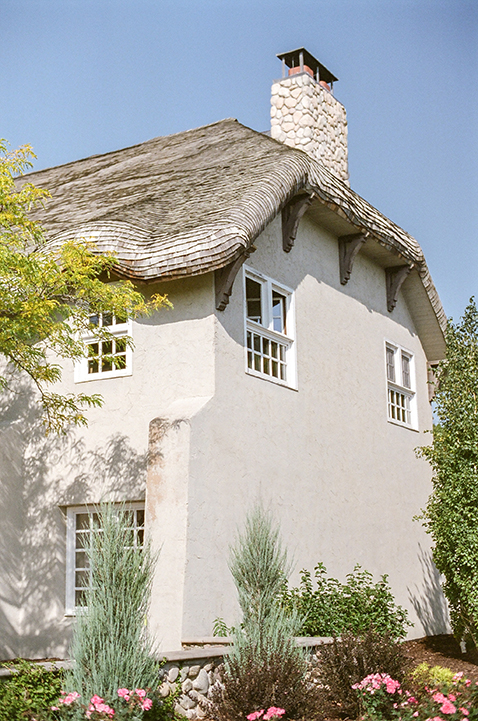 Bright autumnal hues shone through in the floral design. The bride’s bouquet brought together white dahlias, tea roses and cosmos. Creamy yellow butterfly ranunculus, toffee roses and copper beech foliage added warm accents that embodied the transition from summer to fall. And it was all tied up with a fawn crushed-velvet bow.

Atop the table, a show-stopping floral runner took center stage. Similar to the bride’s arrangement, dahlias and cosmos anchored the piece. Gomphrena, plectranthus, foliage and olive leaves tied it all back to the essence of the season with rich apricot tones, greens and saffron hues. 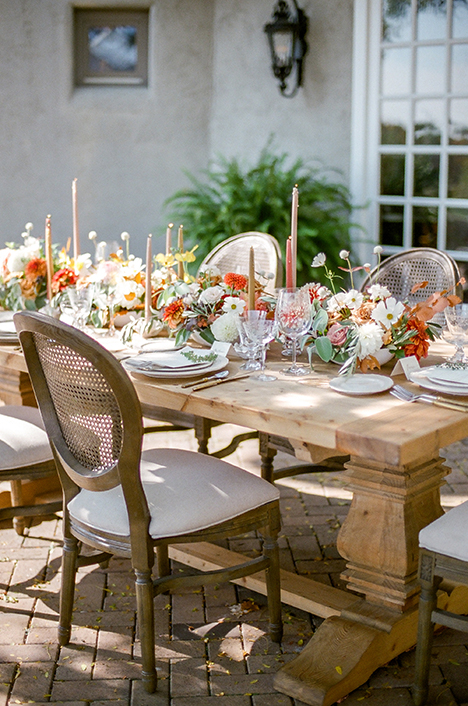 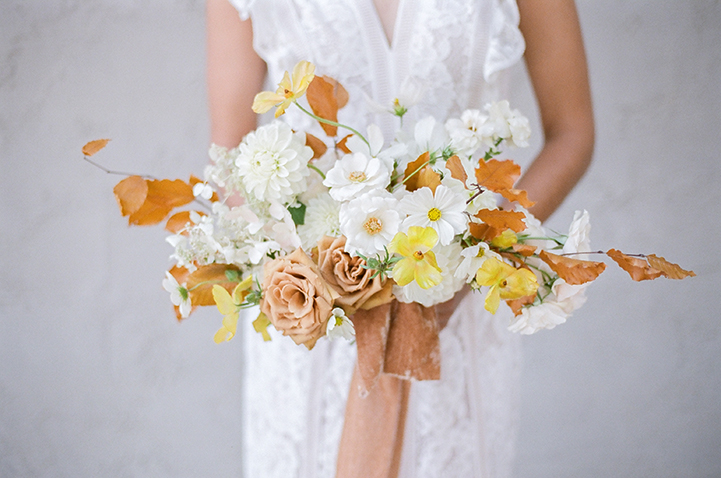 Nestled alongside the flora was the ultimate in casual French cuisine, courtesy of Host a Toast. Pear and fig salad with caramelized onion, rosemary potato galette as well as an assortment of cornichon, mustards, jams, honey, caviar and foie gras rounded out the savory side. For dessert, madeleines with mascarpone and berries were lightly sweet accompaniments. 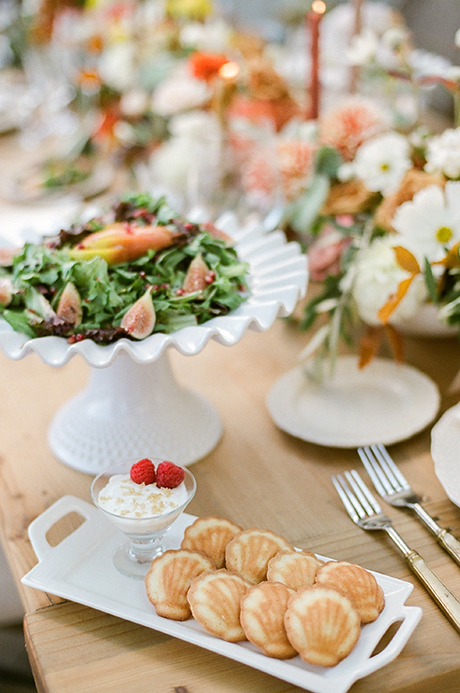 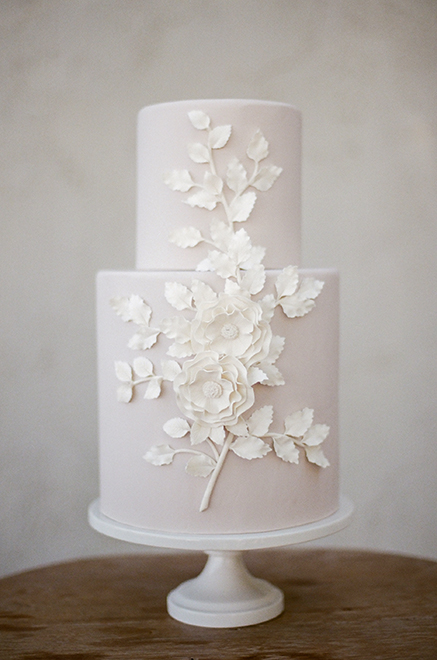 Jill Elaine Designs crafted an invitation suite that carried over the pared-down luxury of the overall design. A woodland landscape lined the deckled-edged craft paper envelopes while the invitations themselves were printed on textured cotton paper. A bespoke line illustration of the Edward Anne Estate lent a playfully classic edge to the suite. 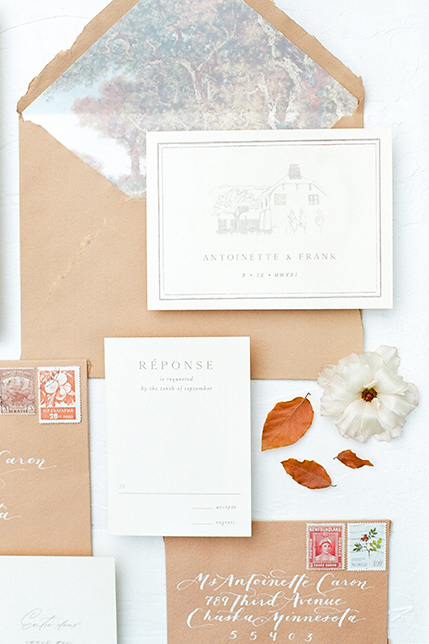 Beautiful sartorial choices tied seamlessly into the design. The bride wore a Tadashi Shoji gown from BHLDN that featured a deep V-neck, short flutter sleeves and allover lace detailing. Streamlined nude Jimmy Choo heels allowed the dress to be the star of the show.

“Cristina Ziemer with Cristina Ziemer Beauty provided an effortless, romantic look with makeup in soft tones and a hairstyle with loose curls, which is the true ‘natural and effortless’ French look,” says Anna.

The groom chose not to wear the traditional black tuxedo, opting instead for a caramel cashmere blazer, which was perfectly complemented by his boutonniere’s autumnal tones. The funky black-and-white bow tie by Brackish from MartinPatrick3 gave the look a modern twist. 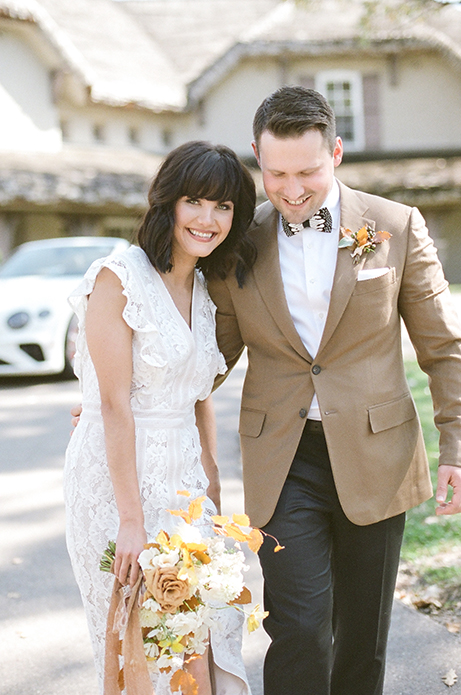 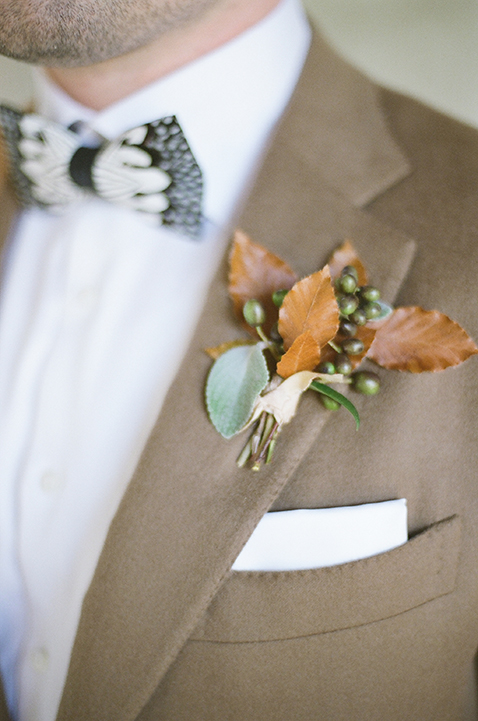